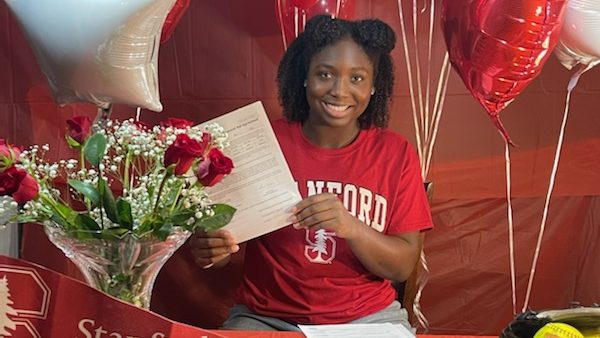 TOPEKA, Kan. (BVM) — This past summer when Nija Canady was contemplating her college future, she knew she wanted to pick a school that would challenge her not only athletically but also academically. And considering one of the most prestigious universities in the entire world was among her options, it’s not at all surprising which college the Topeka High School senior decided to choose.

On Nov. 10, Canady officially signed her National Letter of Intent with Stanford, a program that will undoubtedly challenge the Kansas Honor Scholar and Gatorade Kansas Softball Player of the Year to achieve excellence both on and off the field over the next four years.

“On my official visit we were all kind of hanging out on campus and I just felt the chemistry was there and it felt right,” Canady said of her decision to pick Stanford, which has the nation’s 10th-ranked recruiting class according to Extra Innings Softball.

“Nija is a force both in the circle and at the plate,” Stanford head softball coach Jessica Allister said in an official signing day release. “She is a two-sport athlete that has put together a fantastic high school career both on the softball field and the basketball court. Even with all of her successes, we believe Nija is just beginning to scratch the surface of her potential. We can’t wait to get Nija on campus and for her to start focusing on softball full time.”

Canady’s focus has been split between softball and basketball for much of her high school career. She’s been a 20-point, 10-rebound, double-double machine for the Trojans since she was a freshman and she could’ve easily been a highly-recruited basketball player if she had decided to go that route. She was even rated by ESPN as a four-star recruit and was the No. 15-ranked forward in her class last winter. But basketball began to take a back seat as Canady’s softball career began to take off.

As a junior last spring, Canady helped the 25-0 state champion Trojans become the first 6A softball team in state history to finish a season undefeated. She recorded a minuscule 0.26 ERA from the pitcher’s circle, striking out 232 batters and allowing only 37 hits in 109.1 innings while also batting .515 and slugging 1.364 with 16 home runs and 59 RBIs. Now a senior, Canady is fully focused on softball after she recently made the tough decision to sit out her final high school basketball season.

“I love this team with all my heart and I’m still 100% going to be around,” Canady said, “but after speaking with my family, we all decided that it would be best if I focus on softball this winter. That way I can train for next fall and get better and better … Stanford is a Power 5 School in arguably the hardest conference to play college softball in, so I want to be at my 100% best by the time next year comes around. I still love my teammates and can’t wait to see them in action this winter.”

While Canady will put a lot of energy into her preparation for Pac-12 softball, the class president with a perfect GPA will also be getting ready to challenge herself academically at the next level. Canady said she’s thinking about studying management science and engineering in college, but Stanford students don’t have to commit to a major until their junior year.

Without having to play a basketball season, Canady will also be fresher for softball, which could be bad news for opponents, who had no answer for the Trojans and their dominant ace in 2021. Canady hopes her high school career can end similarly to last spring.

“I know I have one state championship but who’s to say we can’t go out and get two?” Canady said. “We have a lot of returners and I’m really confident in this year’s team. I’ll be excited to see who we have and who’s all improved and I’m just excited. This is my last high school softball season and everyone of course wants to end with a state championship.”

“The goal for any college team is to get to the national championship so we’re expecting the same thing,” Canady said. “I know it’s going to be a lot of hard work, but I’m looking forward to it.”