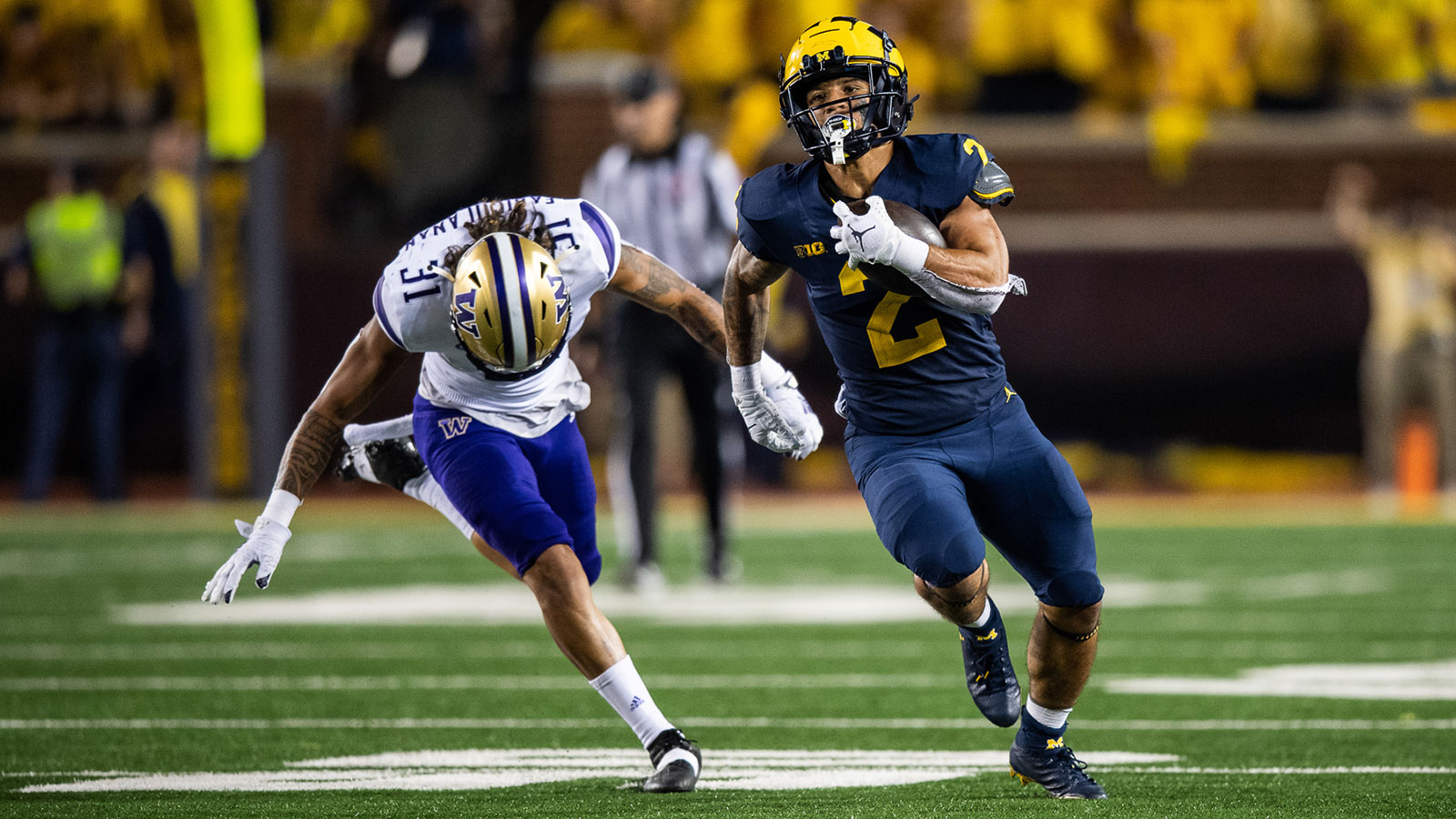 Blake Corum has ran for 10 touchdowns in his sophomore season with the Wolverines. (Credit: University of Michigan Athletics)

At the same time, many athletes have also taken the money they are earning and have used it for good. This past week, Michigan sophomore running back Blake Corum has done just that.

Corum was a high school standout at St. Frances Academy in Baltimore, and showed some immediate flashes during an abbreviated freshman season last year in Ann Arbor, Michigan. But this year, the sophomore back has fully displayed his talent, rushing for nearly 800 yards and 10 touchdowns while also adding an additional 137 yards and a score receiving. One of his true breakout games came in just Michigan’s second contest of the season against Washington, where Corum ran for a career-high 171 yards.

Unfortunately, Corum suffered an apparent leg injury a few weeks ago against Indiana and has not seen action since. Still, he has been an integral part of Michigan’s surprisingly successful season, as the No. 5 Wolverines are 10-1 going into the matchup of their season this Saturday with Ohio State.

It remains to be seen if Corum will indeed suit up against the Buckeyes, but even with the biggest game of his career potentially ahead, the sophomore has found a way to make a splash off the field.

In July, Corum became one of the first Michigan players to take advantage of the new NIL rule, joining Yoke Gaming, an app allowing people to play video games with collegiate athletes.

As Corum has continued to profit over the last few months, he has continued to find a way to use it for good. Over the summer, the running back worked with CLR Academy in Ypsilanti, Michigan. The academy is sponsored by Michigan running backs coach Mike Hart’s foundation.

Over a month ago, Corum sought another way to give back to the Ypsilanti community, and decided he wanted to purchase 100 turkeys to give away to families to enjoy this Thanksgiving.

Last Sunday, Corum along with teammate Nikhai Hill-Green and several other volunteers held the “Giving Back 2 Give Thanks” event, as they personally distributed turkeys along with many other Thanksgiving staples such as mashed potatoes, macaroni and cheese and additional canned goods.

Michigan running back Blake Corum used his NIL money to purchase turkeys distributed today in two Ypsilanti communities in what he calls “Giving Back 2 Give Thanks” pic.twitter.com/bXSPKagiUS

After those working alongside Corum and Hill-Green saw their generosity, an additional 100 turkeys were also donated in the area. The gesture not only impacted those who they helped, but also teammates, and especially Michigan coach, Jim Harbaugh.

Jim Harbaugh on Blake Corum's use of NIL money to pass out turkeys to those in need:

"Blown away by it. … I know Blake and I know what kind of gesture that is. It's genuine. Heartfelt. My next impression was — Why wasn't I doing something like that? Amazing young man."

Corum officially turns 21 on Thursday, Thanksgiving. His act of kindness at such a young age is a great model for anyone to follow, and shows the selflessness of not only himself, but also that of many college athletes who are discovering they now have a greater opportunity to give back.

Corum’s status for Saturday’s crucial matchup with Ohio State remains up in the air. If he does suit up, he will likely impact the game in some capacity. But whether he is on the field or not, the sophomore back has already affected the lives of many this week.