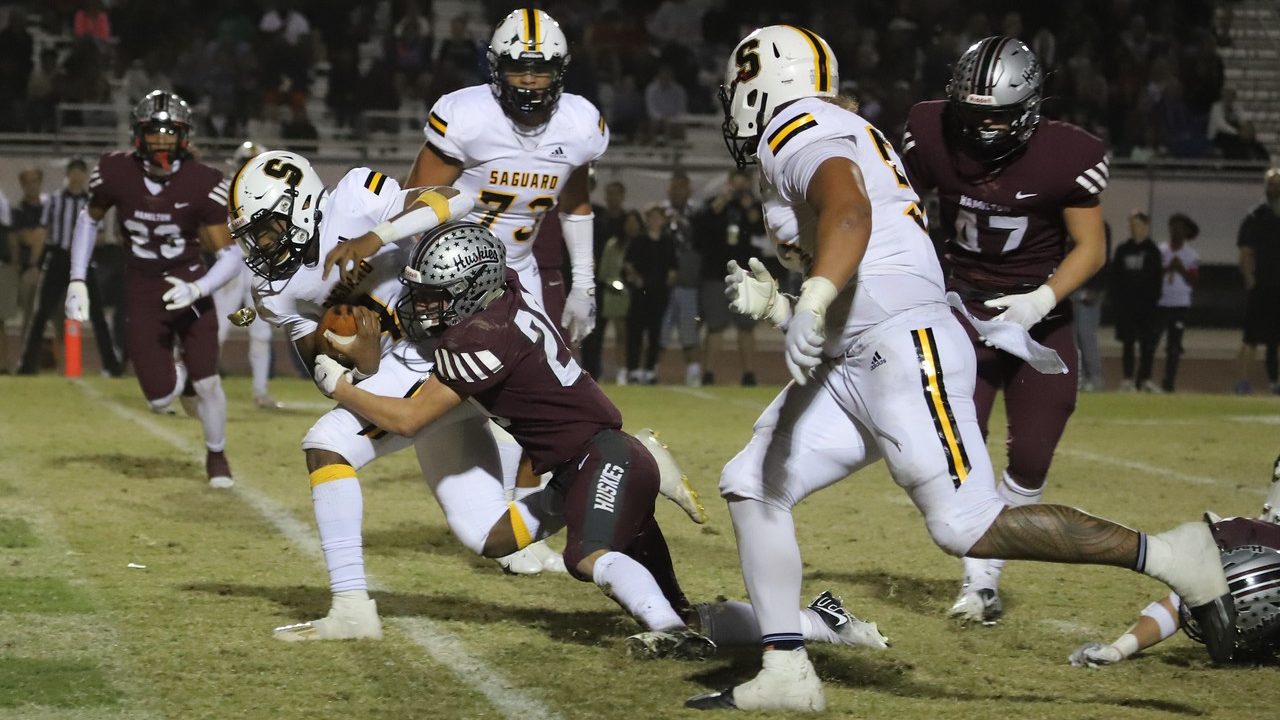 Devon Dampier plunges in for one of his three rushing touchdowns during the AIA Open Division Championship semifinal vs. Hamilton. (Courtesy: Sabercat football)

After sitting out the first five games of the season and being utilized sparingly behind center in the weeks since, the junior quarterback earned his first start for the Sabercats in the Open Division Championship quarterfinals. Dampier played like he’d waited more than a year for the opportunity, throwing for 143 yards and a touchdown while rushing for 102 yards and another three scores in the 42-21 win over Cactus.

But the dual-threat QB’s next start began with some adversity. On the road at No. 11 nationally ranked Hamilton, Dampier’s first pass attempt of the game was intercepted.

“It kind of threw me off a little bit,” Dampier said of the early turnover. “When I threw that interception, I was definitely frustrated but I had my offensive linemen, the wide receivers, the whole coaching staff and the defense telling me they got my back and to just keep balling and do you.

“That definitely gave me some confidence to just come back out and perform for the team.”

The confidence instilled in Dampier by his teammates propelled him to run all over the Huskies defense. After three-star senior Javen Jacobs took a kickoff 93 yards for a touchdown in the first quarter to put Saguaro on the scoreboard, it was all Dampier from that point on.

He ran for a pair of touchdowns in the second quarter then led an 80-yard drive to open the second half, finding Jacobs for a 41-yard catch-and-run before capping it off with his third rushing touchdown of the night to give the Sabercats a 28-21 lead.

Both teams tacked on a field goal before the final horn, but it was Dampier’s 204 rushing yards and three scores coupled with Saguaro’s stingy second-half defense that fueled Saguaro’s 31-24 semifinal win.

The unsung hero of the massive upset, however, was the Sabercats’ offensive line which paved the way for 281 rushing yards and allowed just one sack of Dampier.

“We’re obviously strong at offensive line so sometimes they just tell us to run this play,” Dampier said. “When the o-line wants to do something, we’re going to do it for sure.”

Next up for Saguaro (11-1) is the Open Division state championship game against a familiar opponent: Chandler (11-1).

The Sabercats and Wolves met in the AIA’s first Open just two years ago, with Chandler holding on for a 42-35 win. While Saguaro will be searching for revenge, the Wolves look to win their sixth consecutive championship.

“He had a great game against Hamilton last week and he was a big problem,” Chandler head coach Rick Garretson said of Dampier. “Anytime your quarterback can be a runner and throw the ball, it puts your defense into a mode of option football. Everybody has assignments and you better follow them.”

It’ll be the second time in two years that Dampier squares off with Garretson and the Wolves, but his first time as a Sabercat. Chandler kept Dampier in check last season, limiting him to just 9-of-20 passing for 84 passing yards and 12 yards on the ground, as the Wolves thumped Pinnacle 64-0.

But Dampier is different now, and so are his teammates.

“Even when I was at Pinnacle and watched Saguaro and Chandler play, they definitely had a dogfight,” Dampier said. “They’re (Chandler) definitely a good team and they deserve to be in the championship as well. But everybody is dialed in already so we’re definitely prepared.”

Many wrote Saguaro off after its late-September loss to Chaparral (9-4), but Dampier said the Sabercats are used to, and even prefer, the underdog role. With a Chandler program aiming to lock in its sixth consecutive championship, the Sabercats hope to play spoiler for the second straight week.

“We’ve always been the underdogs and obviously we’re getting a lot of love right now, but it hasn’t been like that all season,” Dampier said. “We definitely still feel like we have something to prove and we’re not letting go of the gas.”

From transferring to Saguaro from Pinnacle after a COVID-shortened sophomore season, to having to sit out the first five games of his junior campaign and then waiting for his turn behind Idaho QB commit Ridge Docekal before finally getting his first start with the Sabercats, it’s been a wild year for Dampier. But it’d be all worth it after a win Saturday night.

“It’d mean everything, man,” Dampier said of what an Open Division Championship would mean to him. “Football has been a grind. The way I’ve bonded with the team and players, it’d be something special to be able to have that moment with them.”