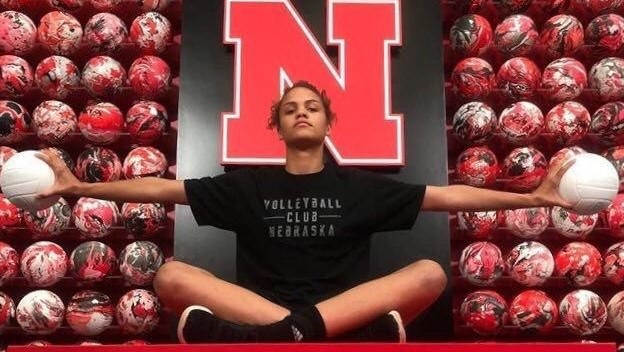 WAVERLY, Neb. (BVM) — Bekka Allick and Lindsay Krause already had a few things in common. They were both stars for their respective high school volleyball teams – Allick at Waverly and Krause at Omaha Skutt — and they’ve both already made an impact at the international level as key members of U.S. U18 national teams. They’ll also both soon be playing for the same perennial college power with Krause having already carved out a big role as a freshman for the national runner-up Nebraska Cornhuskers and Allick set to join her on the court in Lincoln next season.

On Tuesday, Allick continued to follow a path similar to Krause as she was named the Gatorade Nebraska Volleyball Player of the Year — an award Krause won the previous two years.

Allick recorded 442 kills, 341 digs, 50 blocks and 40 aces during her senior season with Vikings, whose season came to an end in the Class B state semifinals. The 6-foot-3 middle blocker/outside hitter was captain of the U.S. U18 national team which won bronze at the FIVB U18 World Championships in Durango, Mexico this past September. Allick became one of only 12 players to make the team after battling back from a broken leg, which ended her junior season a month prematurely.

“Bekka Allick is an amazing student-athlete,” Millard West head coach Joe Wessel said in a Gatorade press release. “She’s just a truly talented young woman who is going to be a future star and role model for the Huskers.”

The Under Armour First Team All-American is ranked as the No. 2 recruit in the country by PrepVolleyball.com and she’ll be part of another strong recruiting class for the Huskers, who utilized several members of a loaded, No. 1-ranked 2021 class to help them reach the national championship match this past fall. Nebraska’s 2022 signing class, including Allick, who’s been committed since she was an eighth-grader, is ranked No. 2 in the nation.

“Finally, Bekka is going to be a Husker,” Nebraska head coach John Cook said in November. “It seems like she has been committed forever. Being at the top of her position and one of the top recruits overall in this class, Bekka provides us some much-needed depth at the middle blocker position, and we expect her to make a big impact on our team from the day she steps on campus.”