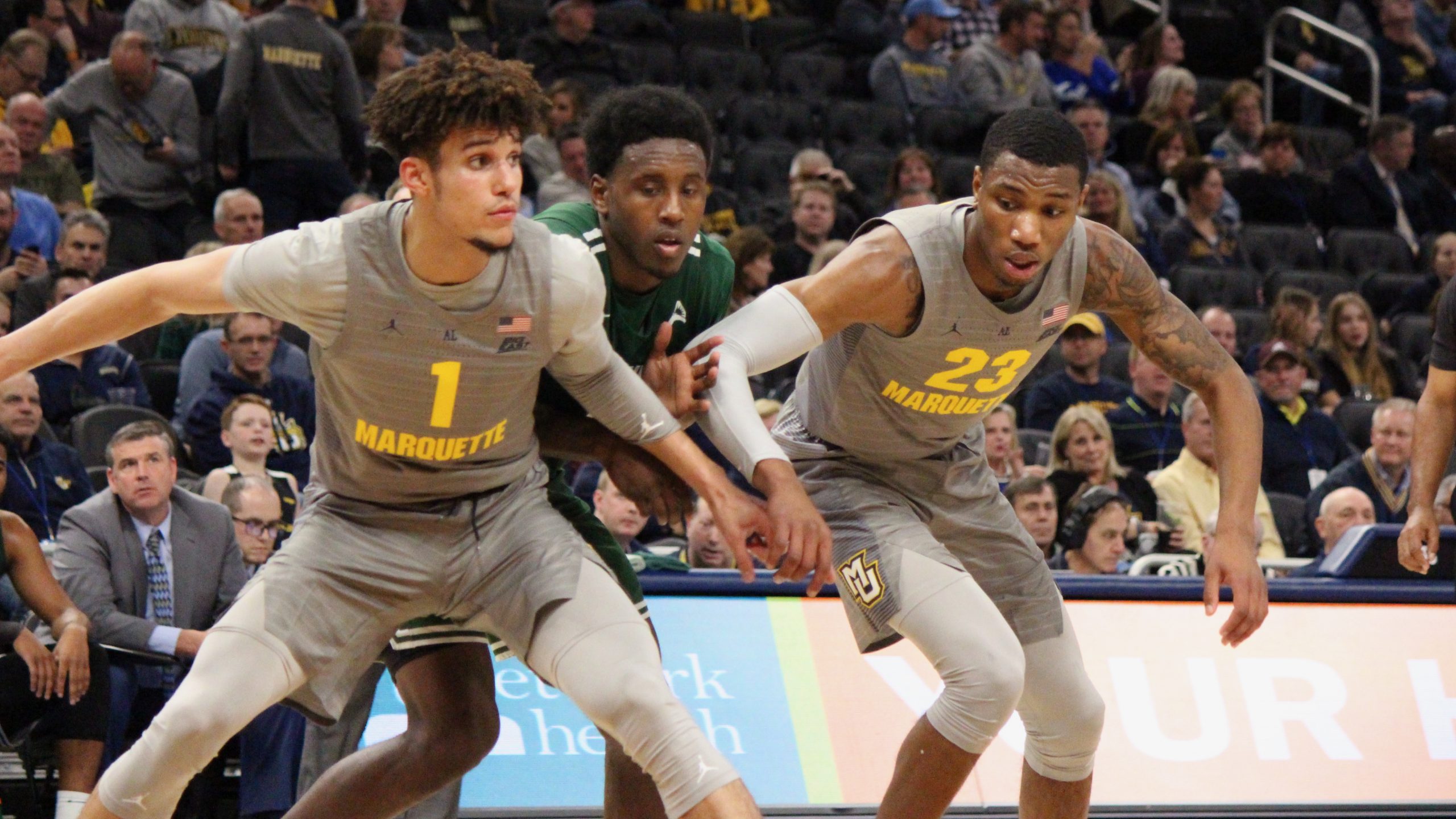 Jamal Cain, right, will be heading home as he has decided to transfer from Marquette to Oakland University. (Photo: Mike Cianciolo)

ROCHESTER, Mich. (BVM) — The last month or so has seen plenty of movement among players in college basketball. With athletes being granted an extra year of eligibility by the NCAA due to the Covid-19 pandemic, we have seen more players enter the transfer portal than ever before.

One of the many who will be suiting up somewhere different will be former Marquette Golden Eagles’ forward Jamal Cain, who will transfer to Oakland University for his final collegiate year on the hardwood.

The move means Cain is coming home, as he is a Pontiac, Mich., native. After beginning his career at Melvindale Academy for Business & Technology, Cain played his final three years of high school ball at Cornerstone Health and Technology in Detroit, where he was a budding star.

Throughout his high school career, Cain scored over 1,500 points and secured over 1,000 rebounds, while also becoming a Mr. Basketball finalist in the state of Michigan during his senior year.

Cain committed to play his college basketball at Marquette, and joined the Golden Eagles along with fellow Detroit-area native and AAU teammate, Greg Elliott. Cain’s career at Marquette would be somewhat up and down, beginning with his freshman year where he averaged nearly five points per game, but showed flashes of some incredible athleticism.

With a loaded Marquette roster in his sophomore season, Cain found himself playing sparingly, but earned a bigger role in 2019-20 as a junior. As a senior leader this past season for Marquette, Cain finally solidified his role.

The senior averaged nearly 10 points per game while starting all 26 contests. He shot nearly 35% from three, and perhaps the best game of this collegiate career came against Big East tournament champion Georgetown in January when he scored a career-high 25 points.

Cain joins former Marquette guard Symir Torrence — who will play at Syracuse next year — as transfers for the Golden Eagles so far this offseason. Senior guard Koby McEwen is also in the transfer portal currently.

Marquette has seen some additional shake ups this offseason as well, as the team let go of Steve Wojciechowski after seven seasons with the program. They have since hired Shaka Smart — a Wisconsin native — who is the former coach of Texas and VCU.

Meanwhile, Cain joins a team that has also seen some change this year, particularly with Oakland guard Rashad Williams leaving the program. However, the Golden Grizzlies still have a nice core intact with point guard Jalen Moore and big man Daniel Oladapo.

The former Big East player also brings experience to an Oakland squad which made it all the way to the Horizon League championship game in March, despite a lackluster 12-18 record.

Cain is one of many who will be in a different uniform come next fall, but the landing spot seems ideal with the chance to push one of his hometown teams over the hump.