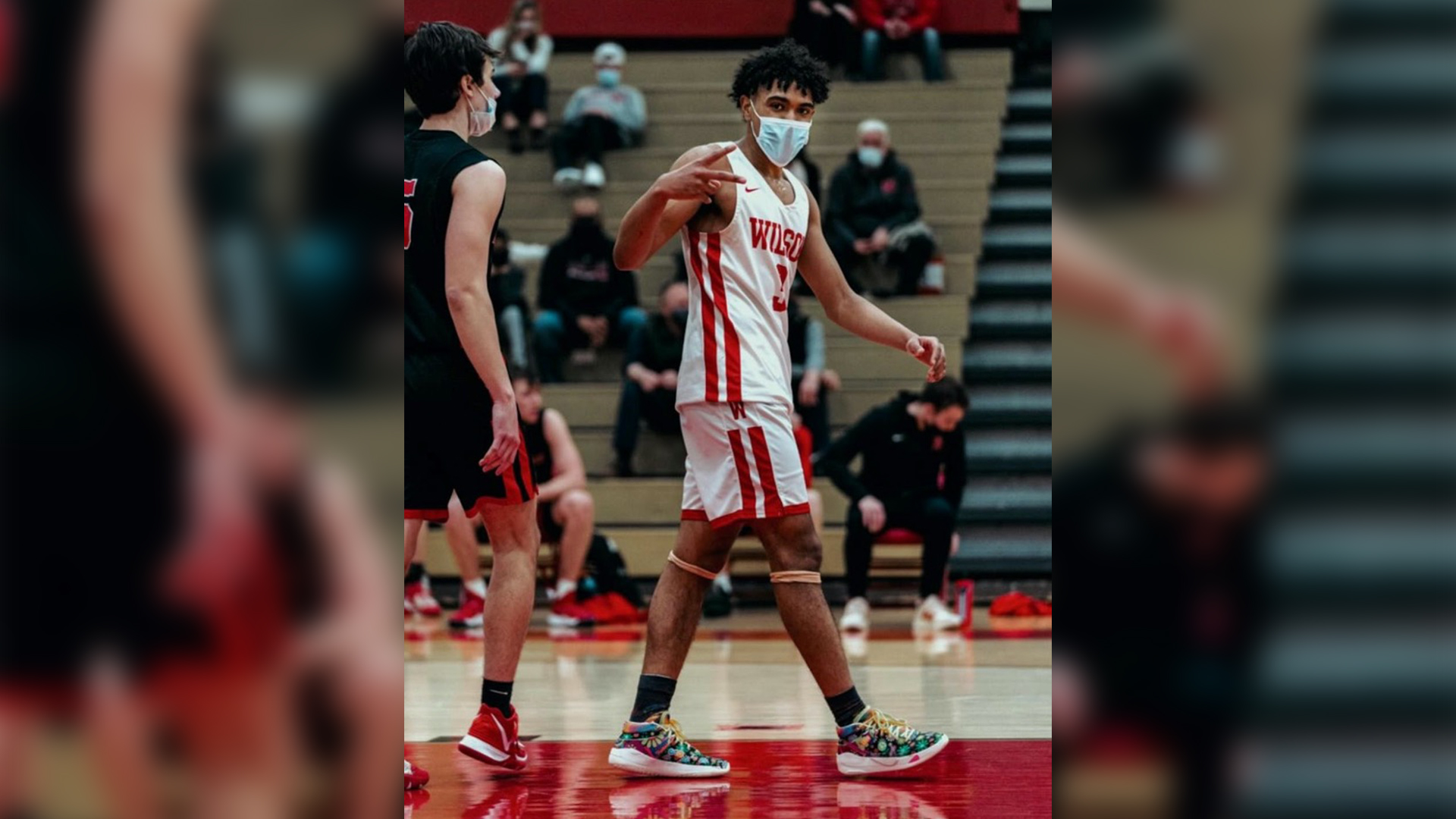 Class of 2021 guard Stevie Mitchell had a lot on his mind regarding his future at Marquette after head coaching changes within the men’s basketball program. (Credit: Derek Campbell, @derek.campbe1l/Instagram)

WEST LAWN, Pa. (BVM) — Stevie Mitchell, the No. 92 recruit ranked by ESPN, signed his National Letter of Intent last November to play for the men’s basketball team at Marquette University. Just one week after the Wilson High School senior finished his record-breaking season, Steve Wojciechowski — who recruited Mitchell to the Golden Eagles — was fired from the program.

“As of right now I’m still going to Marquette and I don’t know if I’m going to be reconsidering,” Mitchell said the same day news broke of Wojciechowski’s firing on March 19. “I chose Marquette because of the relationships I was able to build with the assistant coach [Dwayne] Killings and head coach Wojo, but now that both coaches have parted ways, I’m trying to figure out my next steps by talking to some people. Wherever I go for college, I just want to go into a situation where the coaches believe in me.”

It has since been up to new head coach hire Shaka Smart to convince the four-star point guard to stay committed to the Golden Eagles.

“I am staying committed to Marquette,” Mitchell said on Saturday, a little over a week after Smart’s hiring. “I’ve been talking to Smart a lot recently and I’ve been getting to know him. He’s a really cool guy and really fun to talk to. Obviously he’s been a successful coach and he knows a lot about the game. So being able to learn from him is a great opportunity and I’m really excited to go to school there and get better on and off the court.

“I like the core values he has on relationships, growth and victory. I became comfortable with the whole situation now and Coach Smart makes me feel like he wants me there and showed me that he believes in me.”

Mitchell’s decision was no easy one considering there weren’t a lot of people he could talk to who knew exactly what he was going through. He’s been in contact with fellow Marquette signee shooting guard Kameron Jones.

“Me and Kam have been talking a lot,” Mitchell said. “We’ve been talking about everything going on and even before everything happened we grew to know each other. Obviously he’s really talented at basketball but he’s also a really cool person. I believe he’s staying with the program but I can’t speak for him.”

Another person Mitchell had conversations with following the head coaching changes included Brandon Williams who is the head coach from Philly Pride AAU basketball. Mitchell said Williams, as well as assistant coach Ricky Hicks and team manager Josh Rice, are behind the reason why he was given Division I offers — 14 to be exact — from programs including Georgia Tech, Villanova, Virginia Tech and VCU.

“I talked to head coach Williams in the morning [when the news broke of Wojo’s exit],” Mitchell said. “He and a bunch of others a part of Philly Pride helped me get in contact with bigger schools. Without them I wouldn’t even be here right now talking to people about my future collegiate career.”

These days, the 6-foot-2, 175-pound athlete is reflecting on his high school career and is working every day so that can be ready when he steps on to Marquette’s campus.

“I haven’t come close to my full potential yet,” Mitchell said. “It’s cool to see how far I’ve come with 2,060 points at the end [of my high school career]. I am still a little upset about [losing the District 3 Class 6A championship game] but I’m grateful for the opportunity since it was a season we almost didn’t have. All the games we did win though (20-2) is something to be proud of.”

Now that he’s had the time to reflect on his final high school basketball season, which ended on March 12, Mitchell noted that he never expected his career to play out like it has thus far. Ranked 16th in the country at his position by ESPN, he averaged 26 points this season and hit a new single-game scoring-record of 41 points against Muhlenberg. He is also Wilson’s all-time leading scorer.

“In a way I surprised myself,” Mitchell said. “I was just out there trying to win with the team and I was put into opportunities to score. That game against Muhlenberg was after a three week break of not playing [because of pandemic related issues], but during that break, I was training hard so that I would be ready to play again.”

Mitchell said he is preparing to score thousands of more points over the next four years and beyond with hopes of being an NBA draft pick. He also mentioned he is excited about Marquette because he knows the community there will allow him to continue to inspire young athletes. Before the pandemic, he was attending middle school basketball games and local athletic camps to do his part in helping others.

“When I was younger, I loved it when the older kids acknowledged me so that’s what I tried to do,” Mitchell said. “I just always wanted to be a good example on and off the court because the young kids pay attention to us. It goes a long way when people are connected and it boosts energy to make people stronger.”

While looking ahead, Mitchell said he simply “hates losing more than anything” and believes Shaka Smart will elevate him and the team. He mentioned that he never played for personal accolades in high school and just wanted to win all together.

“I do like Coach Wojo a lot, but now I see Smart and all this as a different opportunity than I had before,” Mitchell said. “At the end of the day I can control myself by getting better and being a good teammate.”